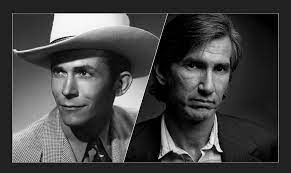 Happy New Year to you and yours  Let's hope it is a better one than the last couple The more long suffering among you will know the drill by now.Since 2015 New Years Day is the day when CCM pays homage to two absolute musical giants who both happened to die on this day some 44 years apart.

Hank Williams, the Hillbilly Shakespeare, died on this day in 1953 aged just 29.Mrs CC asked me the other day that if I had a musical time machine where would I want to go back to. I opted for seeing Hank Williams at the Grand Ole Opry in his prime.

I was fortunate enough to see Townes Van Zandt live twice (once at King Tuts and once at the County Hotel, Perth) before he died aged 52 on New Years Day 1997

Again in keeping with  tradition I'll get in that it will  obviously be downhill now on these pages for the rest of the year. before anyone else does