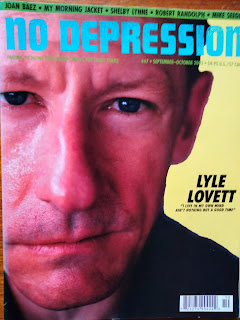 No Depression - The Bi-monthly Journal of Alt- Country
#47 -   September - October  2003
The gentleman who looks like he has been out in the sun is none other than Lyle Lovett probably most famous for his big hair and the fact that he was briefly Mr Julia Roberts.
The article by Geoffrey Himes focuses on his returning to stay in the house which had belonged to his grandfather in Klein Texas (he has an uncle called Calvin Klein!) and the forthcoming release of his album My Baby Don't Tolerate on Curb/Lost Highway. It is not one I have as me and Lyle had parted company by then.
The article also gives a brief resume of his career. He was one of the so called Texas "Class of 86" alongside Dwight Yoakam, Steve Earle and Randy Travis with Nanci Griffiths  snapping at their heels.Throw in couple of old timers in Guy Clark and Townes Van Zandt and Belleville, Illinois' Uncle Tupelo and it was effectively the birth of alternative Country.
However after the release and success of his first two albums Lyle Lovett (1986) and Pontiac (1987) he took a different path  going down a  big band route playing swing, blues, jazz, gospel and honky tonk in a similar style to Willie Nelson and Ray Charles.
I only have three of his albums  - the aforementioned Pontiac, the Grammy winning 1996 The Road to Ensenada which Himes claims is his best album  but one which does nothing for me and Step Inside this House from 1998 a double album of covers of songs by fellow Texans. One track from each I think.
For this week's One from the Top I've gone for Shelby Lynne
Lyle Lovett -If I Had a Boat
Lyle Lovett -Don't Touch My Hat
Lyle Lovett -Texas River Songs
Shelby Lynne - Don't Slow Me Down
Posted by Charity Chic at 08:00