The Clash - The Clash 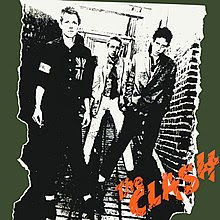 How about this for the 100th charity shop purchase of 2021? A vinyl copy of the 1977 self-titled debut album by The Clash!

The Shaw Trust in Shawlands Arcade primarily sells used furniture. I had a quick look through a poly bag full of records and there it was among the usual rubbish.I took it up to the counter and the assistant said "How much are records. £1.50?". "That sounds about right" I replied.

As you can imagine for a record of 44 years of age it is not exactly in pristine condition. The sleeve is a bit scuffed and the spine is in pretty bad condition. There are a few hairline scratches but nothing serious with no jumping. There is a bit of surface noise between tracks mainly

on side 2 but you don't notice it when the music starts.

I didn't actually have a copy of this version until now. I only had a CD copy of the 1979 US version with the changed track listing. The US version does not include Deny, Cheat, Protex Blue, 48 Hours or the original version of White Riot. Instead it includes Clash City Rockers,Complete Control, a re-recorded White Riot, (White Man in Hammersmith Palais, I Fought the Law and Jail Guitar Doors. You can see why I opted for that version first time round.

It seems only fair that I feature a couple of the original tracks which were omited.

My find of the year.

This one is for Isaac.