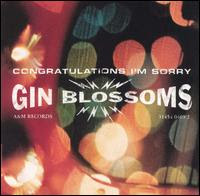 2021 Charity Shop Purchases 97 -Gin Blossoms - Congratulations I'm Sorry
I was a big fan of New Miserable Experience the album by Gin Blossoms from 1992 picking up the CD of the album and two versions of the CD single of Found Out About You although one copy appears to have been misplaced. Hopefully it will turn up eventually.
I hadn't given them much thought for a number of years until the 1996 follow up Congratulations I'm Sorry on A&M popped up in the Sue Ryder charity shop in Newton Stewart.According to the lead singer Robin Wilson the name comes from people congratulating them on the success of New Miserable Experience while expressing condolences for the death by suicide of former band member Doug Hopkins.
The album has the same blend of Americana and power pop to its predecessor but for me it is not quite as powerful. Having said that I have only listened to it a couple of times and it could well become a grower.Others must have enjoyed it as it reached platinum status.
The songs below are the first and third singles taken from the album.
I'm off to try and track down Found Out About You!
..... Found it hiding among the Ss!
Gin Blossoms - Follow You Down
Gin Blosssoms - As Long as it Matters
Posted by Charity Chic at 08:00