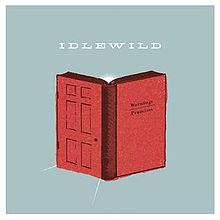 In the space of around three or four weeks I have managed to treble the number of Idlewild CDs on the shelves.

There must have been around 300 CDs in the Hospice shop at Clarkston Toll.I went through every one of them and the only one I came away with was Warnings/Promises the fourth studio album from Idlewild from 2005 and on the Parlephone label.

While receiving generally favourable reviews from the critics the NME  described it as Indie minnows crossing over into the big league and as an  another awesome growth spurt of our most uncompromising, credible and soul-stirring arena-bound rock band.

I've mentioned before that I've come to Idlewild in a back to front way via Roddy Woomble's acoustic and folky solo work. This album seems to bridge the gap from the more  guitar driven and shouty predecessors to Roddy's solo stuff. I must admit that I find it a bit more accessable although I am not averse to the occassional thrash.

In the unlikely event that there are anymore Charity purchases this year they will be held over to 2021.

Idlewild - Love Steals Us From Loneliness