Never Get Sick of the Sea 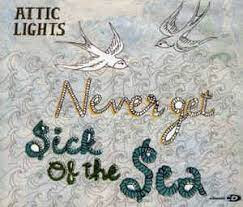 Attic Lights singles just like Corporation buses - none for ages then two come along at once.

Never Get Sick of the Sea is another single off the 2008 album Friday Night Lights and along with yesterday's post God  they were the sole purchases during a pre-Christmas vist to Oxfam at Clarkston Toll.99p each which is a bit more realistic than the £24 they were looking for for Billy Bragg's Life's a Riot with Spy Vs Spy (which in any case I already have).

They slipped of my radar after Friday Night Lights but have since released two further albums on the Spanish Elefant label namely 2013's Super De Lux and 2019's Love in the Time of Shark Attacks. Some further exploration clearly required.

I have the title track from the album but the song Sorry I Was Drunk is new to me.

Something other than Attic Lights tomorrow

Attic Lights -Never Get Sick of the Sea

Attic Lights -Sorry I Was Drunk