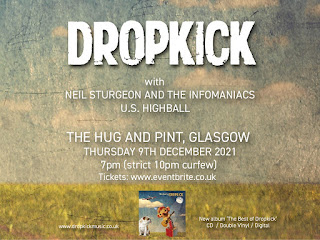 I've been making up for lost time by getting in four gigs in the last few weeks including two in three days which takes me back to the time I did such things regularly.

This time last year I had never heard of  Edinburgh band Dropkick. They featured in Brian's list of his favourite albums of 2020. His description was enough for me to pull the trigger and I fairly rapidly required The Scenic Route  and the Best of double album. Given their large back catalogue it seemed a good place to  start.. Brian is currently on a sabbatical. My bank manager is hoping that he pops up with his best of 2021.

The attendance was pretty disappointing. There can't have been more that 30 folk in the audience which included the members of the support acts. In some ways though it may have been a good thing given the current Covid situation as the cellar of the Hug and Pint is very small and very claustrophobic.

The first act U.S Highball didn't do much for me but I enjoyed Neil Sturgeon and the Infomaniacs who played a rocky guitar based set. I would go and see them again.

Then Andrew Taylor of Dropkick came on and played an acoustic number. He then explained that the drummer had called in sick so Ian Grier the band's keyboard player was on bass with a guitarist whose name escaped me.Andrew was on drums and vocals in a Levon Helm stylee. Despite the enforced changes they put on a great show and I came away with the Andrew Taylor and the Harmonizers album 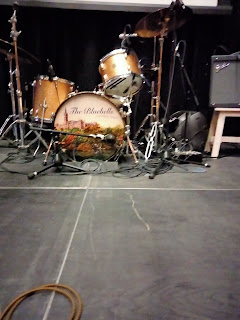 I've seen Sister John four or five times and they always put on a good show.It was good to hear some of the new songs. They acknowledged that they were a bit ring rusty playing live.

The Bluebells were fantastic. It is the first time I've seen them live. They rattled through all their hits and were clearly enjoying themselves with excellent patter and high jinks. At one stage Ken McCluskey gave his tambourine a kick and managed to hit Bobby Bluebell's guitar! They played a lovely version of Rio as a tribute to Mike Nesmith with the McCluskey Brothers on vocals.Mrs CC accompanied me for this one and enjoyed it enormously.

Sister John - Waiting For the Sun