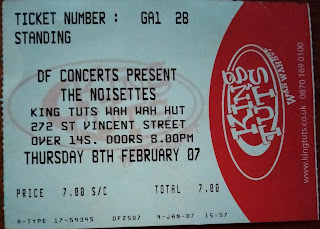 The Noisettes
Thursday 8th February  2007           £7.00                       Ticket No  GA1 28
From the date on the ticket it looks like I saw the Noisettes play three days after the launch of their debut album What's the Time Mr Wolf? which was released on Mercury although my copy is on Universal their US label. Perhaps I bought it at the gig. I must have heard some of their stuff on the radio to make me pop along.I think from memory that it was a solo mission.
I can remember that they put on a terrific bouncy show and that lead singer Singai Shoniwa had a terrific stage presence. Their music is described as indie rock or pop but to me there is also a bit of soul in there.
The album only reached number 75 in the UK Album charts. The New Yorker called the album a smart, relentlessly exuberant thirty-eight-minute demonstration of chutzpah and musicianship, despite the band's affinity with the fizzy amateur energy of punk with Entertainment Weekly saying that when the Noisettes connect, they're a euphoric mix of Bow Wow Wow  and the Yeah Yeah Yeahs. High praise indeed but from what I saw at the show totally justified
The 2009 follow up album Wild Young Hearts was much more successful entering the charts at number 7  which was its highest position selling over 100,000 copies. It is the one you will see in charity shops most often.
There was a third and final album Contact released in 2012 by which time me and many others had moved on. Singai has gone on to pursue a solo career.
The first two below are from Mr Wolf with the third one from Wild Young Hearts
Noisettes - Don't Give Up
Noisettes -Sister Rosetta (Capture the Spirit)
Noisettes -Never Forget You
Posted by Charity Chic at 08:00