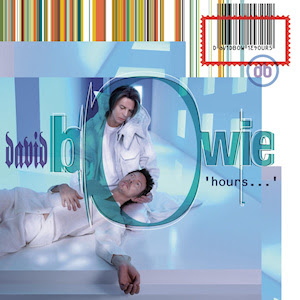 I'll be honest I couldn't have told you that David Bowie had released an album called Hours or as it states on the sleeve ' hours ... '. I certainly didn't recognise the cover when I picked it up alongside Elmore James.

It seems that it was his 22nd studio album and that it was released on Virgin in 1999. This was a time when Bowie was increasingly irrelevant to most people including me and as I was immersed in Americana at the time it never crossed my radar.

However, I will pick up anything by him and give it a go particularlyy if it is only a pound. And do you know what, it is actually a pretty good album. Obviously not as good as the classics that we know and love but definitely a keeper and one that is already growing on me after a couple of listens.

As will be clear from the above I am no expert of his work from this period so who better than the Robster to  give a critique from his terrific Bowie Albums rated series which is a must read.