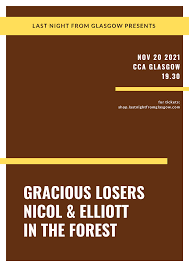 Now that things have opened up a little (hopefully not a temporary phenomenon) I have managed to get to a couple of gigs with another couple scheduled.

The first was the much postponed album launch of Six Road Ends by the Gracious Losers as featured above at Glasgow's CCA.

The first act were In the Forest an indie folk band from Bedfordshire consisting of two sisters and their husbands. Their single On the Run was released as a double A side with Nicol & Elliot's The Storm. They are currently working on their debut album which will hopefully be available next year and which will be well worth getting.

Nicol & Elliot are right up my street. I would describe their music as gothic Americana. They have released 3 EPs to date of which I have a couple. Their Three EPs are available to order as an album and my order is in. It was the first time I've seen them live and they were terrific.

The Gracious Losers  always put on a terrific show and I think that this was the third time I've seen them live.Every time was fantastic. Their debut The Last of the Gracious Losers was my album of the year for 2018. Six Road Ends continues in the same vein of country, rock and a gospel choir.Go and see them if you ever get the chance

At this gig I saw the following poster 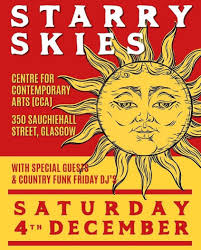 and when I got home and still on a high I decided to order a ticket for this show. Again it seems it have been much postponed due to to Covid.

Starry Skies are another Glasgow band who are fronted by Warren McIntryre. I have their 2007 debut Ask the Animals when they were billed as Warren McIntyre and Starry Skies and our dear pal Ernie Goggins furnished me with a copy of their most recent album Do it With Love. Their entire catalogue is available at a very reasonable price on Bandcamp . The band have recently crownfunded a sufficient amount to enable then to record a new album Small Wonders which should be available next year

Warren is a very convivial frontman and seemed to know about three quarters of the audience. It was a fun night with the band clearly enjoying themselves and getting the occassional guest up to sing. I would certainly go and see them again. They were very bouncy.

Details of another couple of gigs tomorrow

Gracious Losers -Till I Go Home

Starry Skies - Do It With Love