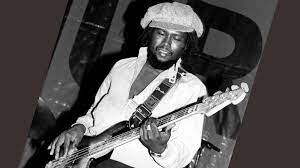 It was sad to hear about the death of Robbie Shakespeare at the age of 68 following kidney surgery.

One of the world's greatest bassists he was part of the most famous rhythm section in Reggae music alongside drummer Sly Dunbar.

You name them, they've played with them -  too many reggae stars to mention , Grace Jones, Madonna, Bob Dylan, the Rolling Stones and many, many more. They also produced countless albums. (see this list for their reggae productions)

I have the 12 inch single of Boops (Here to Go) and their album Language Barrier on the shelves. Make 'Em Move was a single from the album which I think features Africa Bambaataa on vocals

The bass is everything in Reggae music and Robbie Shakespeare played his bass guitar like nobody else; he made the beat drop, speaker boxes shook and we rocked.His passing is a tragic loss; his contribution to the genre is immeasurable.