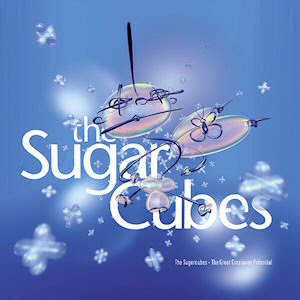 The Sugarcubes were an Icelandic indie band who were responsible for first bringing Bjork to the world's attention.

As with many bands they shone briefly and brightly, in their case from 1986 to 1992.

During this period they released three albums all of which were on the One Little Indian label. namely Life's Too Good (August 1998), Here Today, Tomorrow Next Week! (September 1989) and Stick Around For Joy(February 1992)

The first was an unexpected international success and the third was also well received with the second less so.

The Great Crossover Potential is a greatest hits compilation from 1998, also on One Little Indian containing tracks from the three albums above. It seems only fair to feature one from each in chronological order.

49p from a charity shop in Stanraer and an altogether splendid racket. Just the thing to kick start the weekend