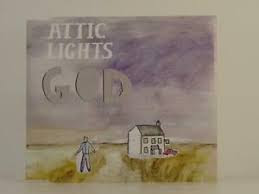 I had high hopes for Glasgow band Attic Lights on and around their 2008 debut album Friday Night Lights which was released on Island.

There were shades of Teenage Fanclub about them perhaps unsurprising given that Francis McDonald was involved in the albums production. Although touted as an indie band there is also a feel of Americana about them.

I had their debut  self-released EP from 2005 prior to picking up the album. God was originally released as a 7 inch single in 2007 prior to a CD release in 2008 .As was the way of things back then it comes with a video.

The title track God appears on the album and I have Ton of Love from the debut EP which has appeared here before.The third track 5 Weeks Behind is new to me.

If you like this sort of thing stay tuned tomorrow.