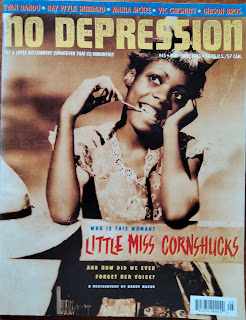 No Depression - The Bi-monthly Journal of Alt- Country
#45  May to June 2003
You could be forgiven reading this to think that you had stumbled across a Blues Collection post as opposed to an article about Americana. And you would probably be correct.
The cover article is by Barry Mazor and stretches over 10 pages. I will confess that I have scanned it rather that read it in depth.He states that her legacy looms large in the history of American popular music, though hardly anyone knows her story.
He then proceeds to tell her story in great detail
Usually the main article centres around an Americana artist who is touring or has released a new album. It is not the case this time as her work has been out of print since 1962.Grant Alden, the editor, acknowledges that it is not their usual editorial fare but rather tells her story
I will further confess that I had never heard the name until now. What I have learned. Her name was Mildred Jorman, she was the first artist to record Try a Little Tenderness and Ahmet Ertegun of Atlantic Records stated that she was the best blues singer he ever heard.. Ruth Brown stated that she was the most important voice that she had heard.
Her personal life was similar to may other Blueswomen. Born into poverty, a dodgy manager/husband, issues with alcohol and associated health issues although she made it to 76.
Here is an abridged versionof her story  from  Wiki which references the No Depression article.
I've managed to track down some of her songs including Try a Little Tenederness.
It is quite hard to read the One from the Top artists but I have gone for the most Alt Country of Alt Country artists the great Ray Wylie Hubbard
Little Miss Cornshucks -Try a Little Tenderness
Little Miss Cornshucks -You Turned Your Back on Me
Little Miss Cornshucks - So Long
Ray Wylie Hubbard -Choctaw Bingo
Posted by Charity Chic at 08:00