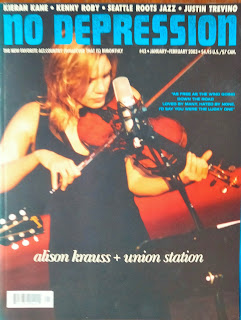 No Depression - The Bi-monthly Journal of Alt- Country
#43    January to February  2003
Now I like Bluegrass as much as the next man but I must confess that I am not particularly a fan of Alison Krauss although she is a terrific fiddle player. There are however a few of her albums on the shelves as Mrs CC is more of a fan than me.
I'm with Adam Sweeting from the Guardian who feels that Krauss and Union Station are suberb when they stick to howdowns and hillbilly music, but much less convincing when they lurch towards the middle of the road.Blender magazine goes even further saying that the flavorless repertoire that Krauss sings steers her towards Lite FM.
Although well established by then they, like many other country acts, gained a new audience with their appearance on the 2000 soundtrack to the Coen Brothers film O Brother ,Where Art Thou? Krauss does a stunning version of Down to the River to Pray with Union Station band member Dan Tyminski being the voice on I'm a Man of Constant Sorrow.
Jerry Douglas from the band has built up an international reputation as a leading Dobro player and is a regular at the Celtic Connections Tranatlanic Sessions concerts.
The band have also been cited as an influence for Newgrass artists such as Nickel Creek. She has also done a couple of albums with Robert Plant
I've chosen a couple of the more bluegrassy numbers from their 2001 album New Favorite on the Rounder label this being the most recent to the article.
I thought that the One from the Top selection could provide a bit of a challenge this week until I discovered that I have a couple of Kieran Kane numbers on various compilations. This one is taken from HMV's Alternative Country Collection featuring artists from the Round Tower, Glitterhouse and Dead Reckoning labels.
Alison Krauss -Down to the River to Pray
Alison Krauss & Union Station - Bright Sunny South
Alison Krauss & Union Station - Take Me For Longing
Kieran Kane - Cool Me Down
Posted by Charity Chic at 08:00