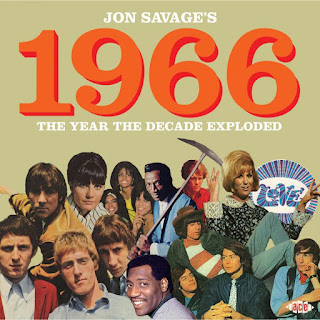 Earlier in the year I featured two of the epic 60's  compilations by Jon Savage on the Ace label namely 1965 -The Year the Sixties Ignited and 1968 - The Year The World Burned.
I have now also managed to get my hands on 1966 - The Year the Decade Exploded accurately described by Ace as the year that shaped the rest of the century. Or as Google Books would have it
The pop world accelerated and broke through the sound barrier in 1966. In America, in London, in Amsterdam, in Paris, revolutionary ideas slow-cooking since the late '50s reached boiling point.
I was only 5 in 1966 and had just started primary school but it is amazing how many of these songs that I recognise. This of course is not because I remember them from that time but because they are of such a quality that they have merited countless plays on the radio over the years.
As with the others in this series Savage comes up with a combination of the classics that we all recognise and some more obscure numbers.You will all be familiar with the classics so I've gone for some of the lesser know ones today with two from each disc.
The Electric Prunes - Ain't It Hard
The Thirteenth Floor Elevators - You're Gonna Miss Me
Count Five - Psychotic Reaction
The Tornados -Do You Come Here Often?
Posted by Charity Chic at 08:00