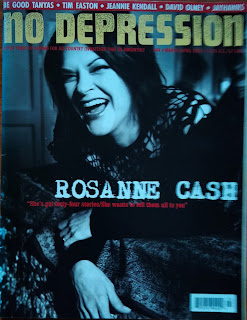 No Depression - The Bi-monthly Journal of Alt- Country
#44 March -April 2003
A couple of issues after her father it is the turn of Rosanne Cash to grace the cover and to be the subject of the main feature.
The article by Lloyd Sachs gives a retrospect of her TH359801234GB  career and highlights two distinct parts which mirror her choices of  producer and husband.
From 1981 -1989 Rosanne enjouyed a degree of mainstream Nashville country success with production by her first husband Rodney Crowell .I have an album Retrospective 1979 -1989 from this period and it is the definition of blandness.
As her marriage and mainstream success deteriorated  she relocated to New York where she formed a musical and personal relationship with producer John Leventhal.
Following a significant break partly due to problems following a polyp on her vocal cord. The article concentrates on the comeback album 2003's Rules of Travel which includes contributions from her dad, Steve Earle,Sheryl Crow and Teddy Thompson.It is an album that I don't have but  I have a copy of her and Johnny's version of September When it Comes on  a Best of that I never knew I had.
I have her next two albums 2006's Black Cadillac and 2009's The List which are well worth having .A track from each is included below. We also saw her one year at Celtic Connections.
So a career of two halves.I'm happy to give the first half a miss but recommend the second one.
I've gone for the Jayhawks for my One from the Top. The arcticle is essentially a Q&A with Gary Louris.Understably there is a focus on their 2003 release the excellent acoustic Rainy Day Music. Up until now I was unaware that Gary co-wrote the opening track Stumbling Through the Dark with Matthew Sweet. Everyday's a schoolday.
Rosanne Cash (feat.Johnny Cash) - September When it Comes
Rosanne Cash - Black Cadillac
Rosanne Cash - Motherless Children
The Jayhawks -Stumbling Through the Dark
Posted by Charity Chic at 08:00