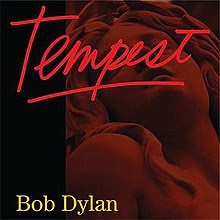 Like R.E.M. whenever I see a Bob Dylan album that I don't have in a charity shop or second hand I will pick it up.As he has released 39 studio albums, 15 live albums, 29 compilations,7 soundtrack albums, 22 box sets and 16 bootleg series issues it will be a gargantuan task to complete the set and one I imagine that I'll never achieve.

Nevertheless I will continue to bash on. The latest one to join the shelves is Tempest his 35th studio album from 2012 and as per usual on the Columbia label. It was picked up in Ballantrae and considering the other fayre on display I am putting it down as a find. Even better it was thrown in with some stuff that Mrs CCand her mum were buying and I wasn't charged for it.

It is the last of his I have before Rough and Rowdy Ways and the last up to then which contained  original material with Shadows in the Night, Fallen Angels and Triplicate consisting of covers. Like  most of his later albums it was critically acclaimed with Mojo describing it as his best album of this century.