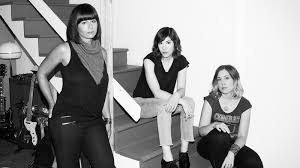 I don't recall knowingly having ever listened to Dinosaur Jr or J. Mascis and there is certainly none of their stuff on the shelves. However it would appear that there are two tracks from D Jr and one from J downloaded onto my hard drive.
I was quite taken though with See You at the Movies a J.Mascis song from his 2018 album Electric Days.

I'm a bit more familiar with Sleater-Kinney having a copy of their second album 1996's Call the Doctor featuring their great song I Wanna Be Your Joey Ramone which has appeared here before.

Surface Envy is taken from their 2015 comeback album No Cities to Love their first since 2005 and if you are familiar with them at all you won't be surprised to hear that it is indeed a splendid racked.

I'm sure J will forgive me but the gals are somewhat more photogenic than him!

J.Mascis - See You at the Movies