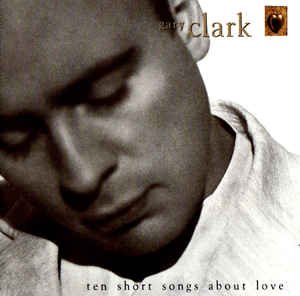 I will understand if, after Monday, that you approach this post with a degree of trepidation.
Rest easy  - there is no cause for alarm or concern today.
Rather it is a return to form as we feature Ten Short Songs About Love from 1993 and the only solo album from former Danny Wilson front man Gary Clark.

The owner of the sweetest voice to come out of Dundee since the late great Billy Mackenzie.
Somewhat confusingly there are twelve songs of the CD version instead of ten albeit one ot two are very short.
Gary was then briefly involved with the bands King L and Transister  before embarking on a lucrative career in Los Angeles as a song writer penning numbers for Natalie Imbruglia, Delta Godrem and McFly among others.
He is now back living and working  in his native Dundee .

Not to be confused with Bluesman Gary Clark Jr.

Gary Clark - We Sail on The Stormy Waters

Gary Clark - Any Sunday Morning
Posted by Charity Chic at 08:00