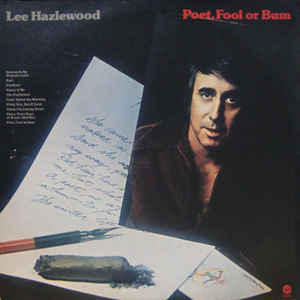 Ballantrae is clearly the place to go for anyone interested in picking up Lee Hazlewood albums.
A previous trip saw me coming away with a vinyl copy of Nancy and  Lee in near mint condition.
This time round it was one of those two albums on one CD jobs with 1973's Poet, Fool or Bum followed by 1977's Back On The Street Again.
According to Iffypedia John Bush of AllMusic gave the album 3 stars out of 5, saying: "Poet, Fool or Bum caught Lee Hazlewood in a sentimental, chagrined mode that didn't compare well to his earlier hard-bitten material.
There is probably a degree of truth in that statement but the album is well worth 30p of anyone's money which is what I paid given I bought 9 CD's for 3 quid and this one contained two albums.
Heck, these two tracks are probably worth 3 quid alone.The title track alone is a belter

Poet, Fool or Bum - I suspect that Lee was probably all three at various stages of his life.
I'll feature Back on the Street Again in due course
Lee Hazelwood - Poet, Fool or Bum

Lee Hazelwood - Nancy and Me