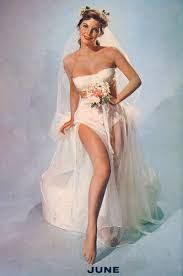 One day late again this month, but it's surely the bride's prerogative to be late.
Although it has to be said that Julie doesn't really have the air of a blushing June Bride (there's a band's name in that sentence somewhere).
Written by Hoagy Carmichael and Paul Francis Webster the album's blurb describes Memphis in June thus:
A rural remembrance done with grace and style. Julie makes your heart leap with the thought of Boss Crump and sweet oleanders
Maybees aye and maybees naw.

Boss Crump was apparently a Democratic politician who from 1910 to 1954 was "the Boss "of Memphis. A precursor to Mr Springsteen then. An oleander is a drought tolerant,evergreen shrub ranging in colour from white to red.
Every day's a school day.

Julie London - Memphis in June
Posted by Charity Chic at 08:00