The Ballantrae Bonanza -White Boy With a Feather 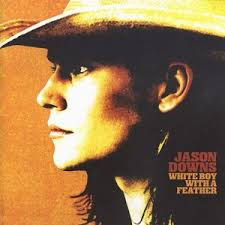 The final installment in the Ballantrae Bonanza series and the second random choice  was Jason Downs with White Boy with a Feather.
Let's face it who wouldn't be tempted with an album cover and title like that?
It just goes to show that appearances can be deceptive.
What part of a mix of country and rap strikes you as a good idea?
Some folk appear to differ. In the 6 Amazon customer reviews there are four 5 star reviews, one 4 star review and one 1 star review. I'm firmly in the later camp.

It has to be said that the song Cherokee (reflecting his Native American heritage) is not bad. Originally I did not get that far having listened to the title track which starts the album and about 30 seconds of the second track.
It has already gone back for some other poor unsuspecting soul.

Jason Downs - White Boy With a Feather
Posted by Charity Chic at 08:00