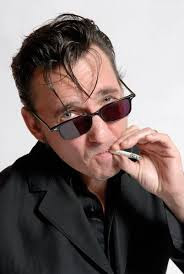 Before it slips off my radar, and for the sake of completeness, I have decided to feature Lowedges by Richard Hawley as a companionpiece to last Sunday's featuring of Late Night Final  given that both were recent charity shop purchases at the same time.
From 2003 it was his third studio album and was the one after Late Night Final and the one before Coles Corner the one which shot him to fame (do keep up).


Last week Drew took the trouble to mention that I'm on Nights was probably his favourite Hawley song so this one is for him.
And of course it would be impossible to ignore his take on  William Bell's classic You Don't Miss Your Water (Till Your River Runs Dry) as that would be foolhardy in the extreme.

Richard Hawley - You Don't Miss Your Water (Till Your River Runs Dry)
Posted by Charity Chic at 08:00