Nothing's Gonna Change The Way You Feel About Me Now 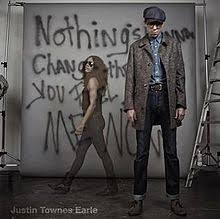 I saw Justin Townes Earle perform when he was around 14. It was at the Concert Hall in Glasgow and he was playing guitar in the band of his father Steve.
Both father and son have had significant addiction issues and thankfully both have come out the other end.
However it has probably left them slightly scarred and you can see it in their writing.

I've posted the occasional Justin song from Bloodshot Samplers before but 2012's Nothing's Gonna Change the Way You Feel About Me Now a recent charity shop acquisition is the first of his albums I have ever owned.
It's pretty stark and autobiographical as these songs demonstrate. He clearly has some unresolved parental issues. Indeed the two albums after this one are entitled Single Mothers and Absent Fathers.

Justin Townes Earle - Am I That Lonely Tonight?

Justin Townes Earle - Movin' On
Posted by Charity Chic at 08:00