Think of It as a Social Service 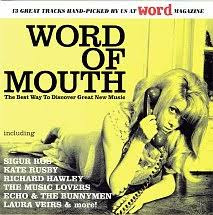 So begins the blur on the above compilation Word of Mouth - the best way to discover great new music - from Word Magazine in October 2005.
One of 4 compilation CDs I picked up at the weekend at 50p a pop.
I buy far too many compilations I suspect that if I wasn't doing the blog I would buy significantly less.
Yup a public service indeed and to paraphrase the blurb again I suffer so you don't have to.
I quite like going through them and sorting out the wheat from the chaff.

The problem is I probably only ever listen to them once or twice and they take up space which is at a premium. I may from now on download the songs that I like and then put them back.The trouble is that takes time and effort so they will probably end up in a big pile somewhere.

13 songs on this one only two of which I already have. Nothing startling but no real duffers either.To my choices:
Sylvie Lewis is an English folk singer and this track is from her 2005 album Tangos and Tantrums on Cheap Lullaby Records. She is the daughter of BBC presenter Martyn Lewis. Thankfully I only found that out after listening to her.
Beauty Shop are another new to me band.They are from Champaign, Illinois and are no longer on the go.This song is from the album Crisis Helpline which was released on Glasgow's Shoeshine Records label
Most of you will be familiar with Nada Surf. They come from New York but should really come from California as their songs have a jingly summer poppy feel to them. This song is from The Weight is a Gift on the ever excellent Barsuk label.

Nada Surf - Do It Again