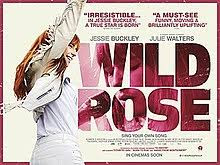 A few months ago we went to see the film Wild Rose starring Irish actor Jessie Buckley.It is about a young woman, Rose-Lynn Harlan, who has gone off the rails but who is seeking redemption by performing Country music.
It is a bit cliched in places but hugely enjoyable. Plus it is set primarily on the South side of Glasgow featuring Glasgow's Grand Ole Opry and the Laurieston Bar
Jessie Buckley is a revelation both in terms of her acting (and very plausible Glaswegian accent) and with her singing.
The night  we saw it Mrs CC got up in the middle of the night and bought tickets to see her perform live at St Lukes tonight!
She also bought the soundtrack. 12 songs, mostly covers, but also a couple of pretty good originals.
Buckley is an actor who sings as opposed to a singer but you can hardly tell. (turns out I was wrong there she is a singer who acts).

The opening sequence of the film is accompanied by her interpretation of Primal Scream's County Girl which sets the tempo for the rest of the film.

It hopefully should be a good night.

PostScript
It was a fantastic night
I was a wee bit sceptical beforehand but boy can she sing.
Blues , country you name it. A bundle of energy with a terrific personality.
Gig of the year so far