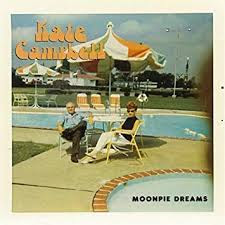 The penultimate Ballantrae CD and quite possibly the last one as I'm not sure that I can pluck up the courage to subject to to the final one. We'll see.
Up to this year I had no albums by Kate Campbell. I now have two picked up in charity shops at opposite ends of the country.
Moonpie Dreams her second album from 1997 joins 2003's Monuments  which was purchased in Fort William in early March.

As I said the last time she is one of those artists who straddles the moveable feast that is the line between mainstream and alternative country.
All Music compares her to Nanci Griffith which I can see and Gillian Welch which I can't. Hope that hasn't put you off too much.