The Ballantrae Bonanza - South of the Border 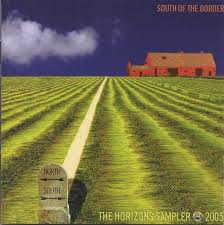 The first of the two random choices from the Ballantrae Bonanza .
At first glance The Horizons Sampler 2005 - South of the Border looked promising. A nice front cover , 17 tracks and the blurb on the back promising:
the best international artists,masters of rock,blues and soul which have received wide appraisals and rave reviews all over the world. If that doesn't look grammatically correct it is because I have merged two quotes.

The fact that the first song turned out to be a noodly instrumental jazz cover of When a Man Loves a Woman gave an indication that all was not what it seemed and that I had misjudged this one spectacularly.

Masters of rock and soul apparently means Led Zeppelin wannabees with less talent than you would see in your average pub band but who insist of attempting 5 minute epics. A lot of extremely poor covers.

For those brave enough here is the tracklist Most of these artists should be avoided at all costs. I had high hopes for Joe Columbo but these were quickly and sadly dashed.
At a push two acts just about pass muster- both soul orientated with female singers and both Italian as far as I can gather..

This one is going back