They'd Get My Vote 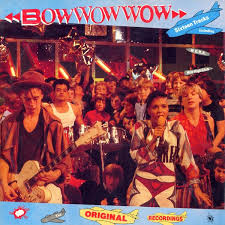 I came away from Tuesday night's Tory Boy Prime Minister debate with an urgent need to cleanse my palate.
Five bald men fighting over a comb all of whom would stab their granny in the back for a whiff of power.
You can see why Johnston has been dodging the media. Incapable of answering a question or indeed of  putting a coherent sentence together.
If, or sadly more likely when, he becomes Prime Minister we will no longer have the right to take America to task over Trump.

Some bouncy music was urgently required and what better than the above Bow Wow Wow compilation which I acquired recently.
Sadly Go Wild in the Country doesn't feature but these two beauties do.
A band that caused controversy at the time due to an album cover featuring a nude 14 year old Annnabella Lwin.
It strikes me that their manager Malcolm McLaren had a lot in common with Boris Johnston - a right pair of absolute chancers with  a degree of style over substance who anyone with any sense could see straight through