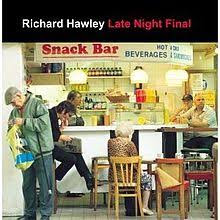 Last week's charity excursion saw me trebling the number of Richard Hawley albums on the shelves.
Up until then I only had Coles Corner.
This has now been joined by Lowedges and today's offering Late Night Final.
Yup a Late Night Final on a Sunday morning.
Named after the cry by newspaper vendors when selling the Sheffield Star evening newspaper in the days when there was such a thing.
In Glasgow the cry was "Times, News and Citizen" as at one stage we had three evening papers.The Evening Times is the only one still limpimg along.

From 2001 on the Setanta label it is second album and his first full length one.It is also rather good

Richard Hawley - Baby, You're My Light
Posted by Charity Chic at 08:00