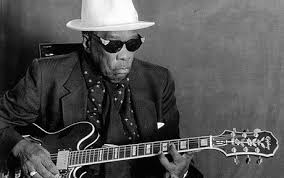 Long suffering readers will remember me featuring artists from The Blues Collection over the years
This is a set of 93 CDs which where released together with an associated magazine between 1993 and 1997.
Initially I picked up between 30 and 35 of them in two job lots in my local charity shop.
Subsequent purchases took my total up to 44.
However I was beginning to come home with doublers or worse still not acquiring ones that I thought I had but didn't.
So I took a note of the numbers of the ones I didn't have and stuck it in my wallet.
Fast forward to Barnardos in Stranraer last week where I spotted the 1st CD in the collection Boogie Man by John Lee Hooker on the shelves.
A quick check told me that I didn't have it and the 45th out of the 93 was duly acquired.