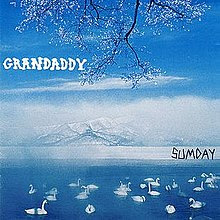 I was pretty chuffed the other day to pick up Sumday the 2003 third album by Grandaddy for 50p in my local charity shop.
My introduction to Grandaddy was The Broken Down Comfort Collection a compilation of some of their early stuff.
It probably put me off them for a bit and it was not until about 18 months ago that I picked up The Sophtware Slump which was much more to my taste.
On the first listen Sumday, which is the follow up  to that one, sounds even better.
It looks like there are a further three for me to explore including last year's Last Place.

Late to the party but enjoying what I am hearing.Lovely cover too.

Grandaddy - El Caminos in the West

Grandaddy - Stray Dog and the Chocolate Shake
Posted by Charity Chic at 08:00