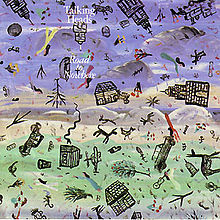 There are many in the blogging fraternity, myself included , who will argue that Talking Heads best work was contained within their first four albums.
However it was after this when they enjoyed their greatest commercial success. Road to Nowhere from Little Creatures  their 6th studio album was their most successful single in the UK Released on 12th October 1985 it was their only UK Top Ten single peaking at number 6. It only reached 105 in the US charts
The b-side Televison Man is another song from Little Creatures. The single version jumps so here is the album version. Both come in at just over 6 minutes and are probably one and the same.