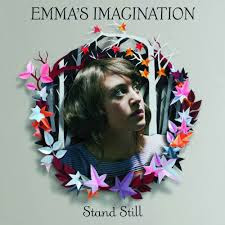 Following a few years travelling and then busking on the streets of Glasgow, Edinburgh born but Dumfries raised Emma  Gillespie entered (under the name Emma's Imagination) and won the 2010 Sky Must Be the Music programme pocketing £100,000 in the process.
Now I have never seen the programme but I imagine that the judges and the voting TV audience must have been impressed by her originality  which would have stood out against all the TV wanabees.

As you would imagine her win generated much publictiy and airplay in Scotland. Her 2011 album  Stand Still was duly acquired via the library and subsequently upgraded last week at the BRICC community charity shop in Ballantrae.
Seldom have I seen so may absolutely awful CDs and records stored in such a haphazard and random way.
However, I was determined not to come away empty handed

As you would imagine it was the usual 15 minutes of fame  and then nothing. She subsequently produced an indepedently released EP Underway in 2013 and an album Pier Siamese in 2016 under her own name.

Don't let the  Murdoch talent show connection and the fact that the album was released on Tory tax dodger Gary Barlow's Future Records label put you off. She is a true talent.