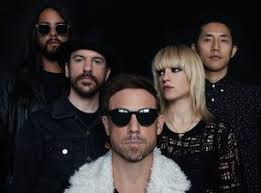 A rainy day meant a trip to Stranraer to take in the charity shops and other assorted delights.

In the Cat Protection League shop I stumbled across the 2008 debut album by Los Angeles band The Airborne Toxic League. Now I was not familiar with their music but the name rang a bell .I remembered vaguely that they had been featured by a blogger, possibly Drew? so I took a punt.

When I got home I confirmed that Drew has in fact sung their praised on a number of occasions.
I feel that you can tell that they are American. I can hear shades of Buffalo Tom in there and maybe a wee bit of the Wedding Present. They produce a splendid racket and it would be interesting to see them live although I would be worried about my ears.
Not sure that they are totally right up me street but well worth a couple of quid.

Talking of a couple of quid I had forgotten to bring a jumper. What is now affectionately  known as my Two Pound Tap was duly acquired!

The Airborne Toxic Event -The Winning Side