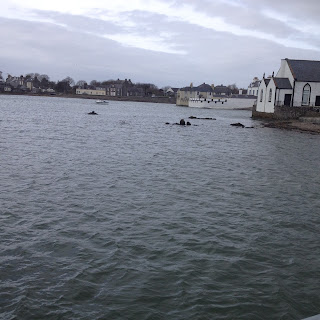 This Thursday I will be mainly plodding away in an office in Wishaw.
Last Thursday after a couple of pints from the local brewery in the Steam Packet  in the Isle of Whithorn I spotted a seal in the harbour (on the rock in front of the white boat).

Back to matters more mundane and the day before and Stranraer charity shops in the rain. I always make a point of popping into the Dumfries and Galloway Mental Health shop but up until now I have come away empty handed after leaving a donation.
This time round I struck lucky picking up Long Time Gone an Uncut compilation from July 2008 featuring 15 All-American Music Classics.
Given the fact that I have albums by 9 of the 15 acts featured it is clearly right up my street.
As is my want I've decided to focus on two of the new to me acts.

Ravens & Chimes are an indie band from the Big Apple.The song featured is from their debut album 2007's Reichenbach Falls on the Better Looking Records label.
Dirtmusic are on the mighty Glitterhouse album so there may well be some of their stuff on the shelves already. They consist of Chris Eckman of Walkabouts  fame,Chris Brokah who has collaborate with the Lemonheads and an original Bad Seed in the shape of Hugo Race. This song is from their self titled 2007 debut album.