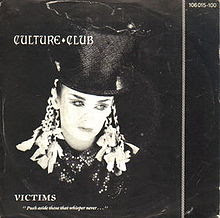 Apologies for the quality of the recording. I could have posted a less crackly version from the Best of CD but that  would rather defeat the point of this series.
Having said that I'm not sure how much gas is left in the tank but we will plod on for a wee while yet.

Victims was the single which came after Karma Chameleon apart from in the States where it was felt to be too depressing to release as a single.They opted for Miss Me Blind instead.
Apparently about the not then publicly known relationship between Boy George and the band's drummer Jon Moss.
It reached number 3 following its release on 28th November 1983 remaining in the charts for 10 weeks. Another one of Mrs CC's.

The b-side Colour By Numbers is the title of the album on which Victims appears but does not feature on the album.

Colour By Numbers
Posted by Charity Chic at 08:00