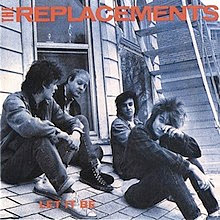 If you only ever get round to purchasing one album called Let It Be you should make sure that it is the one from 1984 by The Replacements.
The third album from the band and one which has been critically acclaimed and which finds itself in many of the top lists which we know and love and one which influenced many a band.
It features the classic line up of Paul Westerberg (guitar and lead vocals), Bob Stinson (guitar), Tommy Stinson (bass) and Chris Mars (drums)
The photograph on the front cover is of the band sitting on the roof of the Stinson brothers mother's house.
The two racks featured open sides 1 and 2.
A must have.

The Replacements - I Will Dare