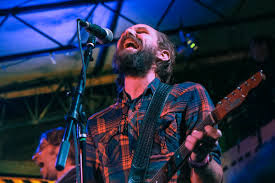 The reason we were prowling the streets of Austin suburbia was not to see the Polyphonic Spree, pleasant though they were, but to catch a glimpse of Will Johnston.
He was the lead singer of Denton, Texas band Centromatic who we had first been alerted to by Adam Reichmann of the band Nadine while chatting to him in a pub in Helensburgh, as you do.

We had previously caught Centromatic at SXSW proper and they put on an excellent show. We subsequently got to see Will a couple of times in Glasgow when his other band South San Gabriel played at King Tuts and when he performed solo as the support act to The Great Lake Swimmers at the Admiral Bar.

Sheryl Crow used to be his babysitter.

These two tracks from one of his solo albums Vultures Await conclude this mini-series.

Will Johnson - Vultures Await
Posted by Charity Chic at 08:00