The Boy Wonder in Dreamland 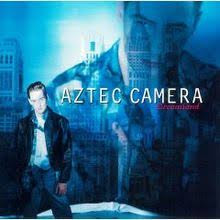 I'd picked up Grandaddy on Friday in my local charity shop and decided to pop in again on Saturday on the off chance. Good job too as I picked up Dreamland by Aztec Camera which was not on their shelves the day before.
Aztec Camera's 5th album from 1993 ten years after the release of their mighty debut album High Land Hard Rain.
It is not one that I was familiar with other than the track Spanish Horses which has features elsewhere on the blogosphere on a few occasions.
Produced by Robbie Frame and Ryuichi Sakamoto it was released to mixed reviews. For what it's worth I quite like it on the first listen.I'd be interested to hear what others think.