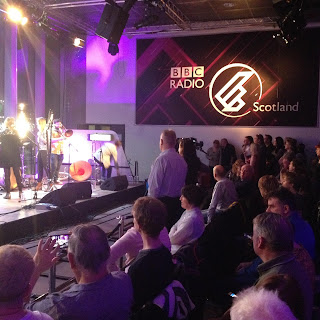 On Wednesday night courtesy of my good friend Euan I got a ticket to be part of  the audience for the BBC
Radio Scotland Quay Sessions programme which was going out on Thursday evening . For UK readers
details here
Compared by Roddy Hart, adopting a lovable buffon role, there were live sets from two Scottish artists.

First up were 6 piece Edinburgh based guitar band Broken Records who after a break for parenthood are celebrating their 10th anniversary with an album What We Might Know scheduled for release at the end of March.
To steal a phrase from Drew I found them not unpleasant but just not very inspiring
It was the second time this year I had seen lead singer Jamie Sutherland as he had previously supported Siobhan Wilson with an acoustic set

Radio 2 Folk Musician of the Year Rachel Newton on the other hand was absolutely brilliant.
Flitting effortlessly between English and Gaelicand playing her harp beautifully she and her band put on a great show. A red sousaphone, which you can probably just about make out in the picture, even featured at some stage.
As if that was not enough a cover of Jolene was thrown into the mix as well!
Here 2016 album Here's My Heart Come Take It (sometimes mistakenly called Here's My Harp Come Take It!) is a high new entry on my must have list. Available along with a download of Jolene on her Bandcamp page.