Don't Talk To Me About Heroes 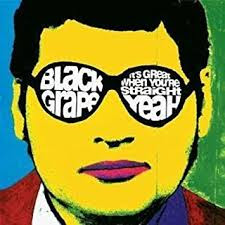 I was probably too old for Madchester and  was certainly too old when the dregs of the Happy Mondays got together as Black Grape in 1993.
I also always felt that necking copious amounts of pills whose provenance was unknown was an incredibly stupid thing to do.
It didn't stop me liking some of the music though.
It's Great When You're Straight ... Yeah unsurprisingly reached number 1 following it's release in 1995

The three singles still sound pretty good to me but I feel that the rest of the tracks are pretty weak and haven't aged too well.
An iconic cover featuring Carlos the Jackal. An album which regularly pops up in charity shops these days.