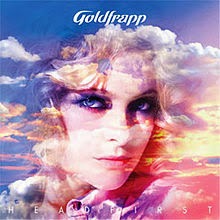 Ya rocket is a quaint Glaswegian term of endearment for a person exuding menace who should be avoided at all costs. Occasionally the adjective pure is added to give it even more emphasis - as in "see Boab he's a pure rocket!"
Rocket is also the first track and the hit single from Head First the fifth studio album from Goldfrapp released in 2010 and an album which I picked up for a couple of quid in a charity shop at Clarkston toll on Glasgow's South Side at the weekend.
After the somewhat ethereal Seventh Tree it is a return to their light electronic music described in a leading search engine as Synthpop or Italo disco (so there you go Luca!)
One critic wrote that it sounds as if they've been commissioned to paint the inside of Olivia Newton-John's mind, circa 1980: all strobe-lit synths, feathery vocals, and goofy synonyms for sex

You would buy it on the strength of that.