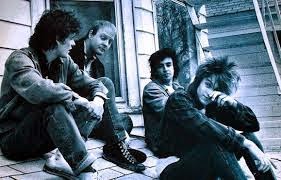 Unlike last week's offering Uncut's Sensation Nation from October 2002 does not claim that any of the 19 tracks contained therein will change the world
I shall (temporarily) spare you some Americana although there are fine tracks by Jeff Finlin. Kelly Willis and Allison Moorer.
Solomon Burke also features with the splendid Don't Give Up on Me.
No, instead you are getting Unsatisfied a track 1984's Let it Be from the Replacements written by the genius that is Paul Westerberg
The second track is Warmer Than Fire  by Ash from 2002's Intergalactic Song Sevens an album I am not familiar with. It puts me in mind of The Teenage Fanclub and The Pernice Brothers which lets  face it is no bad thing

Ash - Warmer than Fire
Posted by Charity Chic at 08:00