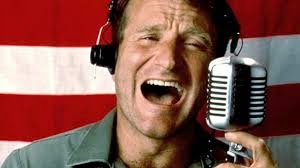 After last week's celebrations we are back to the now traditional Saturday Lucky Dip.
This week it is the turn of Good Morning Vietnam 3
Part of a cheap and cheerful 3 CD box set and also available singly
For a while I had the first two and it was only somewhat later that I acquired the third in a charity shop somewhere.
Absolutely nothing to do with the film of the same name but an excuse to churn out some standards from the late 60s and early 70s.
The first two contain the type of stuff you would expect - the likes of Jefferson Airplane, Mama's and Papa's, Barry MacGuire, Donovan, Steppenwolf etc,etc.
The third is a little bit more eclectic or barrel scraping depending on your view.
Canned Heat, The Band and Eric Burdon are hardly surprises. There is even some soul in the shape of The Temptations and Ike and Tina.
Then it gets a bit silly - Blue Oyster Cult, Black Sabbath and Deep Purple.
Finally it loses it altogether - ELO and Leo Sayer -FFS!
As I say, eclectic!

The Shirelles - Soldier Boy
Posted by Charity Chic at 08:00