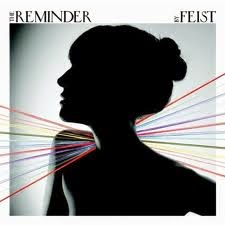 The Reminder by Feist was the 3rd album from Canadian Indie singer Leslie Feist released in 2007
Such is the power of advertising that prior to 1234  featuring on an Apple iPod nano commercial it was averaging 2000 downloads per week. This swiftly rose to 73000 total downloads and the single rose from 102 to number 8 in the UK charts.
Time Magazine ranked it as the second best single of 2007 and it won a Juno award as Single of the Year in her native Canada.
Maybe it's just me, but I much prefer the next track on the album  Brandy Alexander co-written with fellow Canadian and one of my new heros Ron Sexsmith.
Up until posting this I had in my head that the album was called The Remainder - I was wrong there