Just a Mortal With Potential of a Superman 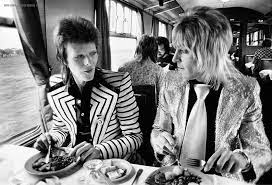 No Top 10 Albums of All Time would be complete without a nod to early 70's Bowie
His first three albums released on RCA between 1971 and 1973 Hunky Dory, The Rise and Fall of Ziggy Stardust and the Spiders from Mars and Aladdin Sane quite literally changed the face of popular music and had a significant influence on society in general.
In the words of Rebel Rebel - "got your mother in a whirl - she's not sure if you are a boy or a girl"
Although he had been on the go for a number of years Bowie seemed to appear from nowhere and took the world  by storm.
I was only 10 when Hunky Dory came out in 1971 and The Jean Genie from 1973's Aladdin Sane  is  the first record of his I can really remember.
Whereas Ziggy Stardust is probably seen by many as his greatest album it is Hunky Dory that I keep coming back to.
It was the album that launched the Spiders  - Mick Ronson, Trevor Bolder and Woody Woodmansey with a certain Rick Wakeman on piano.
And it gives  nods to Andy Warhol and Bob Dylan for good measure..
Not that anyone would ever have only one Bowie album but if you were forced to choose this should be it.