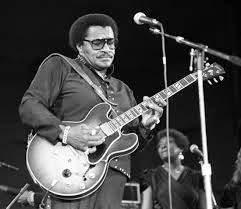 As this series is nearing its completion Southern Soul Sunday is trumping The Blues Collection and featuring Little Milton.
He has previously made a fleeting appearance on SSS30 in the feature on the Mojo Southern Soul compilation.
James Milton Campbell Jr was born in 1934 in Inverness -not the one in the Highlands of Scotland alas but in Mississippi
He grew up in Greenville and was spotted by Ike Turner who was working as a talent scout and signed to Sun Records where he released a number of records between 1952 and 1955.
He worked with some other great labels too most notably Chess, Stax and Malaco and was equally at home playing the blues or singing soul.
According to the Blues Collection sleeve " he has a strong and appealing vocal technique which is complimented by an attacking guitar style, unmatched for its aggressiveness and bite"
But it is his voice we are featuring here on Who's Cheating Who from 1965 and Let's Get Together from 1969.
Majestic

Little Milton - Who's Cheating Who

Little Milton - Let's Get Together
Posted by Charity Chic at 08:00