The Working Girls Are Fine 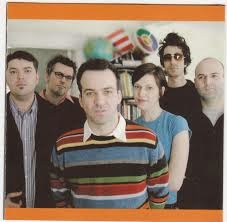 On Saturday's Lucky Dip post I compared Warmer than Fire by Ash to The Teenage Fanclub and The Pernice Brothers.
This led me to looking out The World Won't End the second album by the Pernice Brothers released in 2001 on Ashmont Records.These two songs clearly demonstrate the influence of Bellshill's finest on bands from the other side of the Pond.
Ex Scud Mountain Boy Joe Pernice is joined in the band by brother Bob and a myriad of others.
In a strange quirk of fate he is now in The New Mendicants with Mike Belitsky formerly of The Sadies and Norman Blake formerly of The Teenage Fanclub
Oh, and he is sporting a cracking jumper on this picture from the inner sleeve of the album.

Pernice Brothers - She Heightened Everything
Posted by Charity Chic at 08:00